Menu
BANGSAMORO
"With MAFAR, we can go afar."

MAFAR-BARMM ATTENDS CONSULTATION MEETING ON THE CONDUCT OF THE LAND SURVEY, IMPLEMENTATION OF THE LAND REFORM 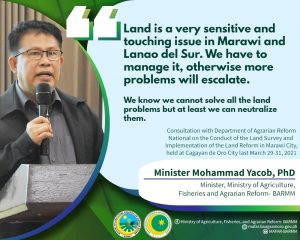 Consultation meeting on the Conduct of the Land Survey and Implementation of the Land Reform in Marawi City by the Department of Agrarian Reform (DAR) attended by the Ministry of Agriculture, Fisheries and Agrarian Reform of the Bangsamoro Autonomous Region in Muslim Mindanao (MAFAR-BARMM), Minister Mohammad S. Yacob. Ph.D., held at Cagayan de Oro City last March 29-31, 2021.

DAR headed by Secretary Brother John Castriciones together with the concerned government offices including MAFAR-BARMM, Department of National Defense (DND), Department of Environment and Natural Resources (DENR), Philippine National Police, LGU of Lanao del Sur, Task Force Bangon Marawi (TFBM) and MSU-Marawi  is present in the meeting to cover all government-owned lands (GOLs) in Marawi City and distribute them to the rightful and qualified farmers in the region.

President Rodrigo Roa Duterte directed the DAR and said offices to distribute the GOLs to be implemented the land reform in Marawi City and entrusted DAR to support the BARMM on the issue of land acquisition and distribution.

Meanwhile, MAFAR minister Mohammad S. Yacob, Ph.D. said, “Land is a very sensitive and touching issue in Marawi and Lanao del Sur. We have to manage it, otherwise, more problems will escalate.”

“We know we cannot solve all the land problems but at least we can neutralize them,” Yacob added.

MAFAR minister is thankful for the support of the president and DAR under the leadership of Secretary Brother John Castriciones.