Menu
BANGSAMORO
"With MAFAR, we can go afar." 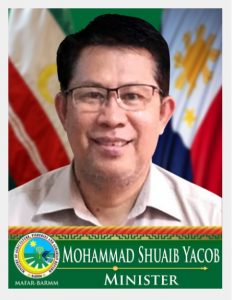 Dr. Mohammad Shuaib Yacob was born on April 30, 1970 in Shariff Aguak, Maguindanao. He studied at the International Islamic University in Madinah, KSA with the degree of Bachelor of Science in Shariah Law and completed his Master’s degree and Doctorate in Public Administration at the Cotabato City State Polytechnic College.

He has served as the former Executive Director of Bangsamoro Development Agency for more than nine years. His contributions have been remarkable to the Bangsamoro People as the agency has given them hope, and has built trust and confidence among the people that has helped in the success of the peace process. He has managed various projects to bolster developments especially in the conflict affected communities with the principle of learning by doing. He has been committed to implement a model of development anchored on BDA core values, geared towards institutional competence and sustainability.

Dr. Yacob continues to serve the Bangsamoro as he accepted the challenge when appointed as the Minister of the Ministry of Agriculture, Fisheries and Agrarian Reform (MAFAR) and one of the Members of the Bangsamoro Parliament. He endeavors to implement social justice by advocating and showcasing hard work, transparency, accuracy, and true leadership. He has been into bringing the Bangsamoro Government closer to the communities by ensuring that the support services they need are brought and given to them directly.

As the offices of Agriculture, Fisheries, and Agrarian Reform have been merged under the MAFAR-BARMM, Minister Yacob pushes for community-driven, and results-based program implementation anchored at making the farmers and fishers more profitable thereby making them feel prouder.

MESSAGE OF THE MAFAR MINISTER DR. MOHAMMAD S. YACOB FOR THE 2020 NUTRITION MONTH